In memory of Members, Boaters & Supporters who have sadly passed away during the COVID-19 pandemic.

The Trust has set up this page to remember and salute those who have sadly passed away during this conflict. These were people who supported ANT and enjoyed our idyllic river and we feel it is right to pay tribute to their memories and salute their contribution.

I am sure you all join us at ANT in sending the families of those fallen our deepest condolences.

These navigators and supporters join the ANT roll of honour of a long list of distinguished people who have been the custodians of our lovely river ensuring that it is here for future generations to enjoy.

‘In memory of friends sadly passed away still volunteering and navigating on the mighty river in the sky, rest in peace.’ 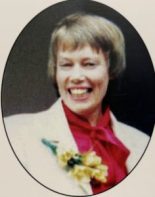 Sadly, we report the passing of Pat Dodson. Pat was a long-standing Director & Trustee of ANT and before that LANT. She joined LANT Council on 31st October 1991 and worked closely with the late Dudley Matthews MBE(Chairman of Reach masters & Associates) running the volunteer wing of the Trust. She was secretary for RM&A as well as being heavily involved in the general running of the Trust. She took responsibility for merchandise sales and the running of the Trust’s stand at events. She also was involved in staff recruitment and management. As LANT and UANT headed towards amalgamation she was also a key supporter of the Avon Lock Keeper Bob Scarrott and used to help with the administration work of the lock.

When amalgamation of LANT and UANT took place, she was one of the LANT Trustees that crossed over to the newly formed ANT in 2010. She played a key role in the amalgamation process and was on the subcommittee that appointed the first General Manager. Pat stood down form Council on 21st May 2013 after a long and distinguished period of service to the Trust and River.

Pat was a very quietly spoken person, but she had a very strong commitment to the Trust and worked incredibly hard for the benefit of the River and its community.

Sadly, Pat passed away on 20th September 2020 following a battle with cancer. Her funeral was held on Friday 9th October 2020 at The Vale Crematorium at Fladbury. Jack Hegarty (Chairman) and long-standing friends Brain & Diana Morgan (ANT Directors) attended the cremation to represent the Trust.

I am sure everyone involved with Waterways and The River Avon join us at ANT in sending Nigel, Pat’s son, and the family our deepest condolences at this very sad time.

In memory of Pat the Trust plans to name one of its new River Rescue Raiders after her.

Pat joins the ANT roll of honour in a long list of distinguished volunteers and Trustees who have been hard working custodians of our lovely river ensuring that it is here for future generations to enjoy.

‘Pat Dodson, still volunteering and supporting the management of the mighty river in the sky, rest in peace’ 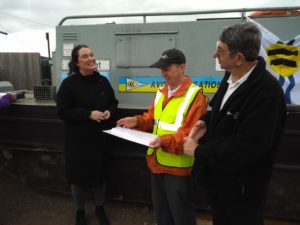 Sadly, we report the passing of Nick Farr. Nick was the Trust’s first Volunteer & Membership Recruitment Director, a role he successfully developed and made his own. A hard working, hands on volunteer who made a significant contribution to the running of the River in sadly a too short period of service.

Nick became an ANT Volunteer in 2015 following his move from Pembrokeshire to Evesham. A ‘Canaller’ and narrowboat owner and keen supporter of the Inland Waterways Association (IWA) who particularly liked to get stuck in with the waterways recovery group (WRG). Nick quickly fell to the charms of the Avon and became a volunteer at Strensham Lock in 2016 later moving on to Harvington Lock. He also launched and led the new national award-winning ANT mobile volunteer team initiative (MVT). Such was his keenness to get out on the river he also took the SWEEP operation at Stratford under his wing. SWEEP plays an important role in keeping the river clear of litter and debris. He also became a keen licence Patrol Officer. Nick took the post of Volunteer & Membership Recruitment Director and successfully swelled our volunteer numbers well past the 100 mark. He has left a massive hole in the Trust but more importantly we have lost a friend and Paul Cronin’s (Volunteer Director) right hand man.

Many friends and fellow volunteers paid tribute to Nick, here are a selection of comments from them:

I always found Nick to be very approachable, down to earth and very supportive. Neil.

This is a very sad loss of a kind, gentle and lovely person. Pete.

I can only say how shocked both Caroline and I were to receive this news.  Clearly Nick has carved out a niche within ANT which will be extremely difficult to replicate by anyone else. Caroline & Richard.

A huge loss for the Trust and the volunteer community as well as his family. Nick was our first contact with the Trust, and we will always remember him fondly. Kevan & Sally.

I am devastated such a wonderful guy RIP. Stephen.

I last saw Nick on Pershore Lock Island as he was showing the ropes to our latest volunteer. We will miss his determination and dedication. We’ll also miss his sense of humour. Michael.

The nicest kindest man I have ever met, Nick will be greatly missed. Andrew.

Sadly, Nick collapsed at the ANT wharf as he arrived with his wife Anne to take the patrol boat ‘Mike’ out on Friday 14th August 2020. He peacefully passed away in hospital on Sunday 16th August 2020 following a major brainstem haemorrhage with Anne and his children at his side. His funeral was held on Saturday 5th September 2020 at The Vale Crematorium at Fladbury. Jack Hegarty (Chairman), Paul Cronin (Chairman of RM&A), Michael Hodges (Treasurer), Clive Matthews (Chief Executive) and Adrian Main (Office Manager) attended the cremation to represent the Trust with both Jack and Paul giving a eulogy.

In Nick’s memory, as a mark of respect, in celebration of his life and to allow all of Nick’s friends to pay tribute to him the hearse passed through Fladbury over Jubilee Bridge on its way to the crematorium. The hearse then paused on the bridge to allow Nick’s friends from ANT to pay their respects. The Trust’s flagship ‘Neptune’ was anchored next to the bridge with the pennant flying and she blew her horns when the procession halted as a mark of respect and to say a final farewell from the river and in remembrance of a fallen navigator. 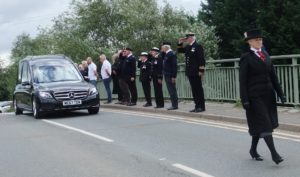 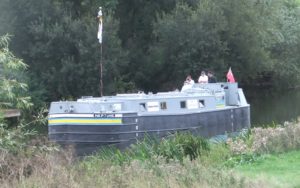 I am sure you all join us at ANT, and everyone involved with the River in sending Anne, Nick’s children and the family our deepest condolences at this very sad time.

In memory of Nick the Trust is planning on dedicating the new Strensham Visitor Mooring to him as this is where Nick started volunteering with us. Also, the Trust plans on renaming our lead Patrol Boat ‘Nick Farr’ formally named ‘Tardis’ in memory of Nick as this was the boat he spent many happy hours patrolling the river on.

Nick joins the ANT roll of honour of a long list of distinguished volunteers and Trustees who have been hard working custodians of our lovely river ensuring that it is here for future generations to enjoy.

‘Nick Farr, still volunteering, recruiting, leading and navigating on the mighty river in the sky, rest in peace our good friend’

Sadly we report the passing of Kate Malcolm, a giver all of her life, which she lived to the full.

Kate and her husband Mike travelled the world when they retired 23 years ago, but they always had a special place for the Avon, the Trust and Wyre Mill Club, where Pastures New, their narrow boat is moored.

They fell in love at just 15 and married in 1963. They had two children, Christopher and Clare, and later two granddaughters Hannah and Abigail. The family enjoyed many fun times on board their boat on the river.

The couple moved round the country with Mike’s job before settling in Pentyrch, where Kate was a maths teacher for 20 years. She also ran communion classes and was on church cleaning rota when she retired.

“Kate was full of fun and laughter and lived life to the full, but she also had so much time for everyone with her kindness, generosity and love,” said one of her tributes. 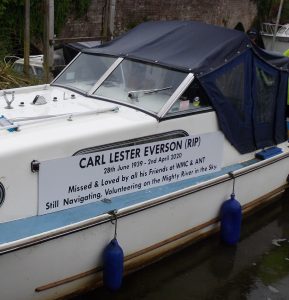 Sadly we report the passing of Carl Everson. Carl was a long standing

member of LANT and then ANT. Carl was a regular supporter of the Trust attending and contributing to many AGMs over the years. Carl and his wife Cathy, were also long standing members of Wyre Mill Club and Carl had served the Club for many decades on its management Committee. Carl had numerous boats on the river, Nimbus IX, Poppy, Sir Percy and more recently a Freeman 23 ‘Charlie Girl’. Sadly Carl contracted COVID 19 in March and passed away on 2nd April. His funeral was held at 10.15am on 28th April.

In his memory as a mark of respect and in celebration of his life, at 10.15am on 28th April, ANT tug City pushed Carl’s boat ‘Charlie Girl’ past Wyre Mill Club followed by his old boat Nimbus IX, now owned by Roger Gardner. The boats stood station opposite the Club Flag Pole with flags at half-mast and there was a sounding of horns while the crews lowered their boat hooks and saluted to say a final farewell from the river and in remembrance of a fallen navigator. In attendance was Terry Grainger, Deputy Chairman of Wyre Mill Club, Adrian Main, Company Secretary of ANT together with a small representation of Carl’s many good friends including Martyn and Dee Dring Wyre Mill Club Managers.

Below is a video of this sad farewell.

I am sure you all join us at ANT in sending Cathy and the family our deepest condolences at this very sad time.

Carl joins the ANT roll of honour of a long list of distinguished people who have been the custodians of our lovely river ensuring that it is here for future generations to enjoy.

‘Carl Everson, still volunteering and navigating on the mighty river in the sky, rest in peace.’ 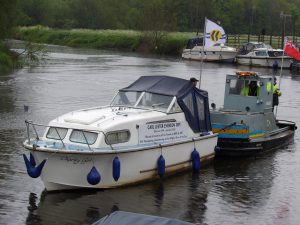