Disclaimer: The videos on this page have not been made by ANT. The opinions therein are those of the Editors and the individual contributors and do not necessarily represent the views of the Trust.

Video Vlog of the River Avon

David from Cruising the Cut visited the Avon and recorded these 3 video vlogs. More of his video vlogs can be found by visiting Cruising The Cut website.

Fore and Aft lines in locks: The Vlogs mention that the locks move boats around more than usual canal locks. This can indeed be true as they are large river locks – and that is why the rules include always using Fore and Aft Lines (front and back lines / bow and stern lines). A centre line is not sufficient. This may have been the reason for excessive boat movement in some of the locks.

Evesham Lock improvements:  in the Vlogs, Evesham Lock is reported to be particularly turbulent (which at the time of filming it was). Since then a major refit has added some revolutionary deflectors to the paddles which has made this lock much calmer and easier to use.

Cruising the River - Offenham to Stratford

On a windy, rainy day in autumn 2018 the team from BBC County File visited to film ANTS work on the Pershore Lock island. Matt Baker visited the island (in the wind and rain), operated the lock and drove the Wheelie Boat. In the afternoon he took to the water for some paddling with a group of Blind and visually impaired children from New College Worcester. 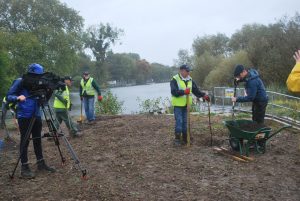